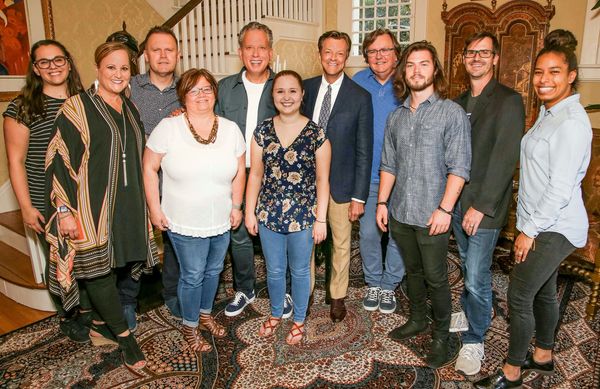 Nashville, TN (September 18, 2019) – Club44 Records announced its opening earlier this month with an exciting reception in Nashville which included a veritable who’s who of industry professionals across all genres of music. With years of experience and excellence in the music business, Club44 Records aims to highlight Broadway, cabaret and jazz genres, and provide a home for artists who represent this timeless music. Their first release, Christmas at Birdland, features well-known Broadway artists Billy Stritch, Jim Caruso and Klea Blackhurst and will release October 18, 2019.

A&R Director, Joel Lindsey, shares, “I love the music of the American Songbook. It represents some of the finest vocalists, musicians, songs and songwriters in our history. What a great thrill it is for me to partner with some of the best in the business to bring this music to some new places and to reconnect with some old ones.”

Industry veteran Wayne Haun is elated to have the opportunity to produce projects in these genres. As someone who enjoys many different styles of music, he lends his expertise to the quality production Club44 Records promises to deliver. “In my 25 years of production and arranging, it has always been a goal to collaborate with artists from both the Broadway stage and the cabaret scene,” Haun explains. “The talent pool from that world amazes me. Their passion, endurance and ability to capture an audience, no matter the size, can give me chills, move me to tears and make me laugh within the same hour. Now I get to be a part of their world, and I am simply humbled.”

Club44 Records has several projects in the works for 2020, including an instrumental recording of highlights from Les Misérables with Brian Eads (pianist and current musical director/conductor of the National Tour), David T. Clydesdale and the City of Prague Philharmonic Orchestra. All projects are distributed to digital and retail outlets worldwide by Sony/Provident.

ABOUT CLUB44 RECORDS:
Based in the Music City of Nashville, Tennessee, Club44 Records is an independent label that specializes in the cabaret, Broadway and jazz genres, as well as the preservation of the American Songbook. Their premier studio release, Christmas at Birdland, drops October 18, 2019 and features award-winning artists Jim Caruso, Billy Stritch and Klea Blackhurst. Club44 Records has additional projects scheduled for early 2020 and is excited to serve as the creative home for many singers, instrumentalists and writers. They are distributed worldwide through Sony/Provident Distribution.