BAM! features eclectic reinventions of the timeless standard “It Could Happen To You," Deep Purple’s rock classic “Smoke on the Water," and original tunes. 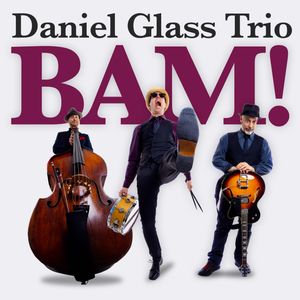 CLUB44 RECORDS has announced the new album from Daniel Glass Trio, BAM!, is available on streaming platforms and on CD in stores and online today, Friday, April 29. The Daniel Glass Trio - featuring three of the busiest and most prolific musicians on the New York jazz scene: Daniel Glass on drums, Sean Harkness on guitar and Michael O'Brien on bass - have created a virtuosic sound that is infectious, fun and incredibly entertaining. With both a keen respect for musical history and a bent toward the innovative and adventurous, this recording never lets the listener get too comfortable in their stylistic expectations but always provides very satisfying twists and turns. BAM! features both original tunes from the band and eclectic reinventions of the timeless standard "It Could Happen To You" and Deep Purple's rock classic "Smoke on the Water."

"One of the reasons I love working with Sean and Michael," says Glass, "is that the three of us share a musical 'mission: to live in the moment and go where the music takes us. Each member of this group is a veteran New York jazzman, having spent decades in the trenches working with hundreds of other artists - particularly singers. Doing this kind of work has endowed us with a particular sense of empathy - the ability to listen, respond and support unselfishly - while also taking the reins when needed."

"All that experience makes us ideal candidates for success in the trio setting," he continues, "where we are unshackled and given the freedom to play what we choose. The resulting musical conversations are broad and deep, nimbly bouncing between style, tempo and dynamic. And yet, the overall effect has the lightness of three kids who've just discovered each other in the sandbox. They continually find delight and surprise in each other's actions - without the need to know where these actions will lead."

"While the trio has been playing together off and on for more than six years," Glass concludes, "it took a pandemic to create the impetus for us to capture our musical mission in the studio setting. The end result is BAM!, a title that hopefully describes more about the group in a single word than the preceding paragraphs can hope to do. I'm thrilled with the results, and I hope that listening to our music will inspire you to forget about your worldly woes and come join us in the sandbox for a short while."

Joel Lindsey, co-founder of Club44 Records, says "It's always very interesting to me when a musician you are familiar with in one setting steps into a completely different spotlight and reveals a new side of their creativity. That's how I feel about the Daniel Glass Trio and this new project, BAM! Each member of the group is uniquely accomplished and recognized as greats in their respective fields, but to see them come together in this formation is truly inspiring. As soon as I heard what they were coming up with, I knew I wanted Club44 to be involved!"

Daniel Glass (drums) has recorded and performed with several chart topping artists from the Brian Setzer Orchestra, Bette Midler and Liza Minnelli, to Kiss frontman Gene Simmons. He is an award-winning author, historian and educator. Daniel is also a member of the powerhouse septet Royal Crown Revue, whose chart topping singles have been performed all over the world from the Olympics to major motion pictures and network television series, including "Dancing with the Stars."

MICHAEL O'BRIEN (bass) is a world renowned bass player. A student of the great Anthony Cox, he has composed or played with Harry Connick, Jr. Ruben Blades, the Jazz Mandolin Project and more. He has taught at the West Bank School of Music and MusicTech (McNalley Smith College.) He is not only an accomplished educator and composer, but his arrangements have been performed all over the world. Recently, his arrangement of "Pine" was performed at the Kennedy Center by the acclaimed string quartet, Ethel.

Sean Harkness (guitar) is in high demand as a performer and composer. He accompanies an astonishing array of world class vocalists, musicians and ensembles. A six-time recipient of MAC (Manhattan Association of Clubs & Cabarets) awards, he recently garnered the Outstanding Instrumentalist Backstage Bistro Award. Deemed a musician's musician by his peers, he is often invited to hold guitar master classes at some of the world's most prominent music schools and universities. According to The New York Times, "Harkness gives full expression to the mood of the moment."

2) It Could Happen to You (Jimmy Van Heusen / Johnny Burke)