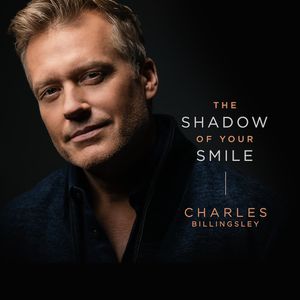 NASHVILLE, Tenn.—Heralding a distinct new chapter in his lauded three-decade career, beloved vocalist Charles Billingsley returns May 13 with The Shadow of Your Smile. A quintessential anthology of nostalgic favorites, the 15-song set also marks Billingsley’s Club44 Records debut. Dedicated to the preservation of the Great American Songbook, the boutique label is home to recordings from such renowned entertainers as Linda Lavin, Billy Stritch and Jane Monheit, among others.

Alongside the wistfully reflective title cut, The Shadow of Your Smile is highlighted by such classics as “It Had To Be You” and “Beyond The Sea”; Broadway showstoppers “Bring Him Home” (Les Misérables) and “You’ll Never Walk Alone” (Carousel); and standout collaborations including “The Very Thought of You,” a duet with award-winning recording artist TaRanda Greene; “Time to Say Goodbye,” featuring acclaimed soprano Adelaide Trombetta; and a soaring a cappella rendition of “America, The Beautiful,” showcasing popular Club44 Records vocal ensemble Voctave.

“From the early days of hearing my parents’ vinyls of Sinatra, Pavarotti and Tennessee Ernie Ford, I’ve had a love for great singers and classic songs from many genres,” shares Billingsley. “After 30 years of making music, I felt like it was finally time to record some of these great tunes that people all over the world love—songs that evoke fond memories and nostalgia. The past few years have been hard, and so many of us seem to have lost our smile. I hope The Shadow of Your Smile will help bring some joy back.”

Pre-add The Shadow of Your Smile HERE and receive instant access to the lead single, "It Had To Be You.”

About Charles Billingsley
From the stages of Carnegie Hall and the Kennedy Center to numerous events around the country, Charles Billingsley has had a lauded 30 year music career. Beginning as a lead vocalist for GRAMMY®-nominated NewSong, Billingsley has since headlined more than 3,200 concerts, released 24 recordings as a solo artist, and garnered seven #1 Inspirational radio hits. His debut Club44 Records project, The Shadow of Your Smile, is more than a collection of well-known songs, but an album full of heart. With gorgeous orchestrations and energetic wow-factor tracks, mixed with moments of meaningful contemplation, The Shadow of Your Smile offers a fresh, positive take on familiar classics sure to bring a smile to listeners of all ages.

About Club44 Records
Nashville-based Club44 Records is a new independent label that highlights the Broadway, cabaret and jazz genres and focuses on the preservation of the Great American Songbook. Following their premiere studio release, Christmas at Birdland, the label has presented Les Misérables Symphonic Highlights, arranged, orchestrated and conducted by David T. Clydesdale and Brian Eads; Love Notes, the latest album from Tony Award and Golden Globe winner Linda Lavin; Billy’s Place from GRAMMY® Award-winner Billy Stritch; Act One from rising vocal star Nicolas King; and Jane Monheit’s Come What May, which celebrates the international Billboard #1 pop/jazz vocalist’s 20th anniversary as a recording artist. Club44 also serves as the creative home of many other singers, instrumentalists and writers. All releases are distributed digitally through Green Hill Productions/Universal Music Group and to retail outlets by Provident/Sony.