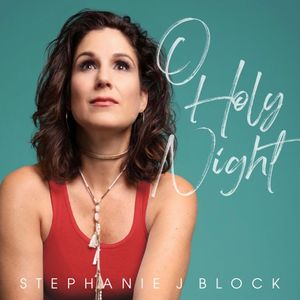 “‘O Holy Night’ has always stirred in me,” Block explains. “I have had the privilege to perform this hymn in many venues, from my hometown church to Carnegie Hall with the New York Pops, and everywhere in between. But this intimate arrangement allowed me to feel the song more than I ever had. And when a song allows you to feel the words, the story, the instrumentation, it becomes more of a prayer than a song.”

Stephanie J. Block has established herself as one of the most relevant and versatile voices in contemporary musical theatre. She most recently won the 2019 Tony Award for “Best Leading Actress in a Musical,” as well as winning the Drama Desk and Outer Critics Award for her star turn in The Cher Show. Block was also recognized for her role of Trina in Lincoln Center Theatre’s 2016 revival of Falsettos, garnering her the Tony Award, Drama Desk and Outer Critics nominations. In 2013 she was recognized with both the Drama Desk and Tony Award nomination(s) for “Best Leading Actress in a Musical” for her portrayal of Alice Nutting/ Edwin Drood in The Roundabout Theater’s production of The Mystery of Edwin Drood. Other Broadway credits include Reno Sweeney in the 2011 Tony Award-winning revival of Anything Goes and 9 to 5: The Musical, for which she earned a Drama Desk nomination. She created the roles of Grace O’Malley in The Pirate Queen and Liza Minnelli in The Boy from Oz (opposite Hugh Jackman). Ms. Block is known for her portrayal as Elphaba in the Broadway company of Wicked, as well as originating the role in the First National Tour, for which she won the Helen Hayes Award for “Outstanding Actress in a Musical.”

Ms. Block has sung with numerous symphony orchestras including the NY Pops at Carnegie Hall, Boston Pops, National Symphony Orchestra (under the baton of Marvin Hamlisch), Dallas Symphony, Indianapolis Symphony Orchestra, Utah Symphony, Columbus Symphony, Charlotte Symphony, and the Cleveland Pops. Her solo concert has been critically acclaimed and continues to sell out throughout the US and in London. Her debut solo album, This Place I Know, is currently available.

CLUB44 RECORDS – based in the Music City of Nashville, Tennessee – is a new independent label which aims to highlight the Broadway, cabaret and jazz genres, preserve the American Songbook, and provide a home for artists who represent this timeless music. Following their premiere studio release, Christmas at Birdland, the label has presented the new album from Tony Award and Golden Globe winner Linda Lavin; Billy’s Place from Grammy Award winner Billy Stritch; Act One from rising vocal star Nicolas King; and Jane Monheit’s Come What May, which celebrates the international Billboard #1 pop/jazz vocalist’s 20th anniversary as a recording artist; and the new holiday album from viral a capella sensation Voctave. Club44 Records also serves as the creative home of many other singers, instrumentalists and writers. All releases are distributed digitally through Green Hill Productions/ Universal Music Group and to retail outlets by Provident/Sony.