There’s More Where That Came From is a contemporary big band swing project that highlights standards, pop songs, and new compositions. 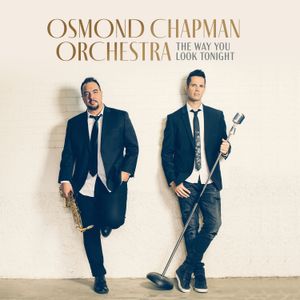 Club44 Records has announced the debut album of the Osmond Chapman Orchestra - led by Emmy Award-nominated vocalist David Osmond and Grammy Award-nominated bandleader, producer and saxophonist Caleb Chapman - on Friday, June 4. There's More Where That Came From is a contemporary big band swing project that highlights standards, pop songs, and new compositions. The first single - a new take on the classic "The Way You Look Tonight" - is available starting today, Friday, May 7. Stream or download the single at greenhill.lnk.to/TheWayYouLookTonight

There's More Where That Came From reinvents selections from the current pop charts (Bruno Mars' "When I Was Your Man"), Motown (Stevie Wonder's "For Once in My Life"), country (Johnny Cash's "Ring of Fire"), and vintage Hollywood (The Wizard of Oz's "Over the Rainbow"), in addition to original songs written just for the album. "Our passion for music spans several decades, so we were able to cast a wide net," says Osmond. "When we first started this project, we were inspired by the great crooners like Frank Sinatra and Bing Crosby and the pop standards they championed. Then we considered more modern vocalists like Harry Connick, Jr. and Michael Bublé and how they creatively incorporated songs from the '60s and '70s. And we didn't want to limit ourselves to music of the past, so we strove to include current chart-toppers like Bruno Mars. We aimed to revise the limits to the Great American Songbook to include the songs of today. There doesn't need to be a distinction between pop and rock and jazz - it's all just good music."

"These are songs we all grew up with," continues Chapman. "'Smile' is one of those numbers that lifts you up, no matter what mood you're in. And 'Over the Rainbow' is instantly recognizable by everyone and just filled with so much hope. At first we wondered if it made sense to bring Johnny Cash into the mix with a big band spin on 'Ring of Fire.' But that's part of what we're here to do, to take these songs and make them our own. Our arrangers did such a wonderful job honoring these legendary songs but putting an artistic and creative stamp on them. Personally, I am really proud of it and how it came together."

The three original compositions on the album - "We Might as Well Fall in Love," "I Need a Real Good Thing" and the title song - are written in the vein of classic standards, but with a sophisticated contemporary twist. The record features selections co-written with Nashville-based songwriter Roger Brown, who has penned hits for Johnny Mathis, Barbra Streisand, George Strait, Tammy Wynette, Kenny Chesney, Crystal Gayle, and many more. "We have a terrific working relationship with Roger," recalls Osmond. "When we play the originals live in concert, they are frequently the audience's favorite tunes of the set. That's really saying something considering how hard it can be to get people to listen to new music, especially when you have an evening of the greatest songs ever written. It's humbling to have our own music get that kind of reception."

The all-star band is the backbone of this project, with star players including Rashawn Ross on trumpet (known for his work with The Dave Matthews Band), Jeff Coffin on saxophone (current member of The Dave Matthews Band and three-time Grammy Award-winning member of Bela Fleck and the Flecktones), and Karl Hunter on tenor saxophone (25-year veteran of Big Bad Voodoo Daddy). "I wanted players that were not only technically proficient but could help us put a modern take on this project," says Chapman. "They are the leading voices of their generation on these instruments and it was important for me to have them on the album. Playing with this band is exhilarating... there's nothing they can't do. To have a vision of what you want it to sound like, and then have that vision come to life in 3-D is very inspiring to me. These top-tier musicians are part of the secret sauce that helps make this recording so special."

Even though he grew up in a famous musical family, David Osmond brings considerable originality to his singing. "I have worked in the industry for years, and I can tell you," comments Chapman. "David's approach is incredibly fresh; he's not really approaching these songs as a jazz singer, but not as a pop singer either. He's created his own unique and incredibly proficient approach to these standards and it's gratifying to hear how flawlessly he floats over these arrangements. They are built for him and he uses them to the full advantage."

Label co-owner Joel Lindsey concludes, "Club44 Records is all about the American Songbook and this project from Osmond Chapman Orchestra celebrates just that with amazing performances of great songs, old and new! The orchestra brings a sly sophistication to everything they do and this record makes you want to just sit back and let it pour over you like honey. Sure, David Osmond might have inherited some talent from his renowned family but this guy has taken what he was given and he's worked hard to prove that he's an accomplished artist standing in his own light. Caleb Chapman has taken years and years of performing, producing and conducting and he's carved out a sound that demands attention from the harshest of critics. Together, these two gentlemen have created something very, very special!"

ABOUT OSMOND CHAPMAN ORCHESTRA:
Individually, DAVID OSMOND and CALEB CHAPMAN bring a massive amount talent, with both of them spending virtually a lifetime creating music and touring.

In the tradition of his family name, Osmond has had a successful career as a vocalist and TV personality, often appearing on national tours with his well-known uncle and aunt, Donny and Marie Osmond. David also eventually replaced his uncle, Donny, in his role in the musical production of Joseph and the Amazing Technicolor Dreamcoat. He has performed in more than 17 countries and has had three top 40 hits in the U.K. and has released multiple solo albums.

Chapman has made a name for himself as a GRAMMY-nominated band leader, producer, performer, author, and respected industry executive. Over the years he has shared the stage with scores of GRAMMY-winning jazz artists and members of some of the biggest acts in history including Journey, the Blues Brothers, Toto, the Saturday Night Live Band, Santana, Genesis, and more.

Combined with Utah’s top musical talent, the Osmond Chapman Orchestra is an unstoppable force set to take the nation by storm! The industry recognizes this, so it was no surprise when the band recently signed a record deal with Club44 Records out of Nashville. The label will be overseeing the band’s debut album, “There’s More Where That Came From” in June 2021. The album features originals penned by the band’s leaders as well as fresh arrangements of classics designed to feature the incredible talents of the world-class band, as well as Rashawn Ross of the Dave Matthews Band, Karl Hunter of Big Bad Voodoo Daddy, and 3-time GRAMMY-winner Jeff Coffin also of the Dave Matthews Band.