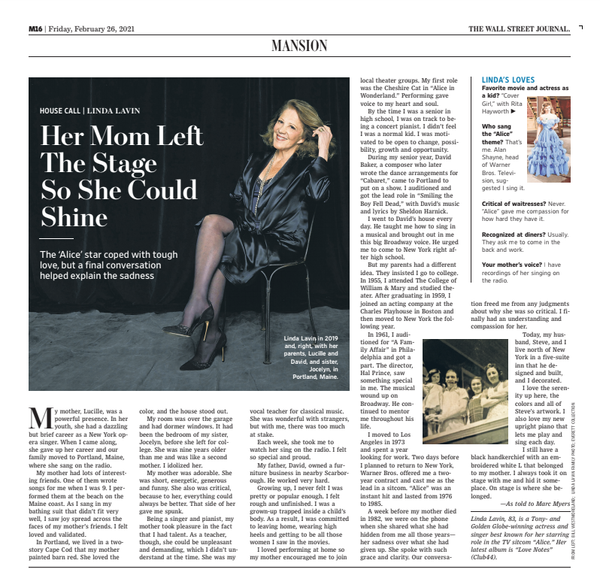 Linda Lavin has won a Tony Award, as well as a Drama Desk, Outer Critics' and Helen Hayes Award for her performance in Broadway Bound in 1987. She is a six-time Tony Award nominee for her roles in "The Last of the Red Hot Lovers", "The Diary of Anne Frank", "The Tale of the Allergist's Wife", "Collected Stories" and "The Lyons". In 2017, Linda was seen in "Candide" directed by Hal Prince and received stellar reviews. Inducted into the Theatre Hall of Fame in 2011, other theatre credits include "The New Century" (Drama Desk Award), "Other Desert Cities" (LCT), and "Too Much Sun" (Vineyard Theatre).

Linda will costar in the off-broadway production “The Bedwetter”, written by multi-award-winners Sarah Silverman, Adam Schlesinger, and Joshua Harmon.

She is a two-time Golden Globe winner and Emmy nominee for her role as Alice on the 9 year hit TV series "Alice" on CBS, and she co-starred with Sean Hayes in the NBC Series "Sean Saves the World". Linda recently guest starred on "MOM", "The Good Wife", and "Madam Secretary". She featured as a series regular on the CBS sitcom “B Positive,” and was most recently seen on the series "9JKL" opposite Mark Feurstein and Elliot Gould, as well as "Brockmire" and "The Santa Clarita Diet".

Her recent feature films include "A Short History of Decay", "Manhattan Nocturne" with Adrien Brody, "How to Be A Latin Lover" opposite Rob Lowe and Eugenio Derbez, "Nancy Drew and the Hidden Staircase", and the upcoming "Naked Singularity” with John Boyega and Bill Skarsgaard. She also appeared with Robert De Niro in Nancy Meyer's "The Intern”.

Linda was born in Portland, Maine and is a graduate of the College of William & Mary, which recently conferred on her an honorary doctor of arts degree where she endows a theater program. She performs her concert act with Billy Stritch, her music director, and has released her first CD "Possibilities" an album of jazz standards and show tunes.