Come What May, her first album in five years, highlights her fresh takes on first-rate standards, with deft interpretations honed after years on the road. 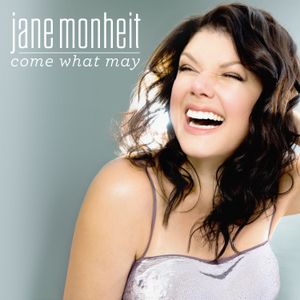 CLUB44 RECORDS has announced that Come What May, the enchanting new album from international Billboard #1 pop/jazz vocalist Jane Monheit, will be available on CD and digital and streaming formats on Friday, March 12. This dynamic all-new collection of songbook classics - produced by Jane Monheit, Wayne Haun, and Jamey Tate - will honor Monheit's 20th anniversary as a best-selling recording artist. She will celebrate Come What May with a special virtual concert, streaming live from Feinstein's at Vitello's, on Friday, March 12 at 8:00 PM Eastern. For tickets, please visit feinsteinsatvitellos.com. Pre-order the CD at Walmart, Target, Barnes & Noble or Amazon, and pre-order the digital album at lnk.to/Jane-Monheit-CWMPreRelease

Come What May, her first album in five years, highlights her fresh takes on first-rate standards, with deft interpretations honed after years on the road. "There is a certain comfort that comes from performing a song night after night to audiences around the world," she says. "So by the time we finally got into the studio to make this record, I had the luxury of the arrangements being perfectly familiar, rehearsed, and polished. Putting together this project was a smooth, relaxed process and I think that's reflected in the final product."

Monheit has achieved two goals in both making an album that sounds timeless, and yet still addressing the current moment. "So much of Come What May is really a way for me to cope with the pandemic in my own personal way," she explains. "For example, 'Let's Take a Walk Around the Block.' We would all like to visit the magical places listed in the song, but we don't have any money right now - so let's just enjoy where we are. I believe everyone can relate to that idea!"

Jane's lifelong love affair with Brazilian music comes alive with another song about travel, the Antônio Carlos Jobim standard "Samba Do Avião," also known as "Song of the Jet." "Musicians are accustomed to traveling the world non-stop," she comments, "and now that we're all grounded, it feels very strange. I miss touring so much that I just can't explain it. I literally dream of being back on the road!"

On the flip side of the pandemic experience, the exuberant, feel-good medley of "On the Sunny Side of the Street" and "Get Happy" is an opportunity to lift spirits. "People stuck at home need a little encouragement and cheer," Jane says, "The album has some sad, heavy tunes and I knew we needed to balance those with some levity." That same notion inspired her lighthearted take on the musical theater classic "I Believe in You," which opens this collection on a brisk high note.

Other selections reflect Monheit's adoration of the legendary vocalists that preceded her. "I've worshipped Judy Garland my entire life, but the first version of 'The Man That Got Away' I ever heard was from Ella Fitzgerald. Her interpretation is so matter-of-fact. In my version, I tried to balance Judy's glorious drama with Ella's subtlety. This track is an homage to both my heroes." She credits both Ella and Billie Holiday for introducing her to the lesser-known "When a Woman Loves a Man." Jane recalls, "That's another song I've adored since I was a tiny kid. I particularly love our recording since it has such a sophisticated and intelligent chart by our musical director Michael Kanan. I think you can tell just by listening how much we enjoy playing together."

In fact, Come What May is all the more special considering the unique bond that Jane shares with her musicians. "Michael and I go back over two decades," she continues. "I love that man with all my heart; he's like my big brother. And then of course our drummer is my husband Rick Montalbano. We're coming up on our 20th wedding anniversary! It's always a delight to work together, but this project has a particular resonance. For the last few years we haven't been able to tour together since our son is in school, and Rick stays home with him. So one bright spot of the pandemic is we're in the same city so we can make music together again."

Jane adds, "I am thrilled at the wonderful contributions of our west-coast bass player David Robaire, Kevin Winard on guitar, and Miles Okazaki on percussion, and I love that we could add some beautiful strings, one of those magical additions to give the record that extra sparkle. What I set out to do is take songs that have been done really often - 'My Funny Valentine,' 'Lush Life,' 'The Nearness of You' - and present them directly, sincerely, and truthfully. If you can strip them of any pretention, people remember how compelling a simple standard can be."

"I can't say enough amazing things about Club44," concludes Jane. "I've been with many labels over the years - indies, majors, I've even made records for my own imprint - and I've seen everything. And I've never had an experience this easy, this positive and this fun! Joel Lindsey, Wayne Haun, and their team have gone out of their way to help me bring my musical vision to life, and I treasure that freedom and trust."

Label co-owner Joel Lindsey responds, "When we first started the label, it was my dream to sign Jane Monheit, so this new record of gorgeous standards really is that dream come true. And the fact that it helps mark her 20th anniversary as a recording artist is such an incredible bonus. The trademark lyricism of her voice, the detail of her interpretations, the sheer joy of her creativity shines brightly here in Come What May. We're so proud to have this album on Club44 Records."

Jane Monheit has been acclaimed as one of the leading jazz/pop vocalists of her generation by audiences and critics alike. The successful concert and recording artist studied voice at the Manhattan School of Music with Peter Eldridge, a founding member of the vocal group New York Voices, and was first runner-up in the 1998 Thelonious Monk Institute's vocal competition. Her debut album, Never Never Land (2000), featured jazz all-stars Kenny Barron, Ron Carter, and Lewis Nash. The first of four recordings for N-Coded Music, the label founded by Dave Grusin, Larry Rosen, and Phil Ramone, it was voted "Best Recording Debut" by the Jazz Journalists Association and stayed on the Billboard jazz chart for a year. Her follow up, Come Dream with Me (2001), debuted at #1 on the Billboard jazz chart. The 2003 DVD/CD Live at the Rainbow Room, documenting her performance at the iconic New York club with a symphony orchestra, was conducted by Alan Broadbent. The Grammy Award-nominated Taking a Chance on Love, her swinging label debut for Sony (2004), featured a duet with global superstar Michael Bublé. Other major recordings include: the Christmas-themed The Season (Sony, 2005); Surrender (Concord, 2007), featuring guests Ivan Lins, Sergio Mendes, and Toots Thielemans; and The Lovers, The Dreamers and Me (Concord, 2009), which notably expanded her repertoire to pop songs by Paul Simon, Fiona Apple, and Corinne Bailey Rae. Her recording of "Over the Rainbow" was featured in the film Sky Captain and the World of Tomorrow, starring Jude Law, Gwyneth Paltrow, and Angelina Jolie. Monheit has collaborated with a who's who of jazz luminaries, including Wynton Marsalis, Ramsey Lewis, Christian McBride, John Pizzarelli, and more, also appearing on albums by Terence Blanchard, Tom Harrell, Freddy Cole, Mark O'Connor, Harold Mabern, David Benoit, and Club44's own Nicolas King. Follow Jane on Facebook, Instagram and Twitter enjoy her music on YouTube, Spotify, Apple Music and Pandora.