Act One: Celebrating 25 Years of Recordings will be released on Friday, January 22 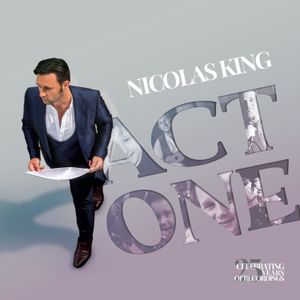 Club44 Records is launching their relationship with acclaimed vocalist Nicolas King with the release of his new collection Act One: Celebrating 25 Years of Recordings, which will be available in streaming and digital formats on Friday, January 22. A physical CD will follow on Friday, February 26. As they plan King's all-new album within the next year, the label looks back with this lively history of King's already multi-decade career. While focusing on his suave vocals, and showcasing both eternal standards and newer songs, the album boasts guest appearances from stage and screen luminaries Liza Minnelli, Tom Selleck, Jane Monheit, and Norm Lewis. The recording also features major musical contributions from two-time Grammy Award nominee Mike Renzi (renowned pianist and music director for Peggy Lee, Tony Bennett, Lena Horne, and Mel Tormé) and Charles Calello (arranger and producer for Barbra Streisand, Frank Sinatra, and Ray Charles). Music legend Connie Francis provides liner notes. The album's first single "What a Wonderful World" - a duet with celebrated Broadway leading man Norm Lewis - is currently available.

"I started compiling this record merely so that I had something fun to sell at concerts," says Nicolas. "But once the pandemic hit, I found myself with loads of free time and began uncovering so many recordings from the past 25 years. This tiny project ballooned into something much bigger than I anticipated, but it turned into an opportunity to look back at what brought me to this point. I think of this album as the ending of my childhood chapter and a wonderful setup to the next! I thank all my musical guests for their contributions, but I'm especially grateful to musical titans Mike Renzi and Charles Calello. They both have extraordinary legacies, and I am humbled to be added to the list of iconic artists they've collaborated with."

Label co-owner Wayne Haun adds, "When I was first introduced to Nicolas, I was mesmerized by his ability to put across a lyric and the way he effortlessly holds the audience in his hand. It feels fitting to release this collection as we prepare to enter the studio for an all-new studio album. We're thrilled to take the journey with Nicolas as he continues his trajectory as one of the most exciting young vocalists of his generation."

Act One: Celebrating 25 Years of Recordings is a compilation of sparkling new studio tracks, selections from his previous solo albums, and vintage archival gems from early in his career. The collection opens with a spoken live introduction by Liza Minnelli, a memento from the decade Nicolas toured the world with her. The new selections include a lushly orchestrated version of "But Beautiful," performed with jazz singer Jane Monheit. "Yes Sir, That's My Baby," a charming duet with Tom Selleck, was taped onstage when they appeared together in the Broadway play A Thousand Clowns when Nicolas was just 10 years old.

"I'm So Glad We Had This Time Together" - the inimitable TV theme to "The Carol Burnett Show" - is heard in a medley with "My Shining Hour." The pairing is dedicated to Ms. Burnett and her late daughter Carrie Hamilton, whom Nicolas worked with on the Broadway play Hollywood Arms. Other highlights include a loose, jazzy rendition of the Four Seasons standard "Can't Take My Eyes Off You" and a pensive interpretation of the Irving Berlin classic "How Deep is the Ocean," elegantly accompanied only by Alan Bernstein's bass. Nicolas's take on the beloved "Sesame Street" favorite "Sing" swings with the razzle dazzle of a driving big band arrangement. He also makes sure to present new songs written in the classic style, including "Looks Like They're in Love" (Bob Levy) and "The Only One" (Tracy Stark).

The storied entertainment anthem "There's No Business Like Show Business" provides a fitting coda to the album. The track, merging a delightful early recording with a brand-new studio cut, showcases both his roots as a young budding showman and his present-day vocal prowess, musical intelligence, and ebullient verve.

Will Friedwald - noted author and Wall Street Journal scribe - perhaps said it best: King "is a compact dynamo, a whirlwind of a performer who balances incredible excitement and high energy with restraint and nuance. He gets the crowd in his pocket within the first 30 seconds of walking out on stage and keeps them there for the rest of the night."

Nicolas King has been performing since he was four years old. He was in three Broadway productions (Beauty and the Beast, A Thousand Clowns with Tom Selleck, and Carol Burnett's Hollywood Arms, directed by Hal Prince) before the age of 12. He has also appeared in many national TV commercials, including the award-winning "Oscar Mayer Lunchables" commercial. King has appeared on TV talk shows, such as "The View," "The Today Show," "Sally Jesse Raphael," "Liza & David" and was on "The Tonight Show" with Jay Leno twice (including Leno's final week as host in 2014). He is the recipient of the Talent America Award, the Julie Wilson Award, the Bistro Award for Outstanding Performer of the Year, the AMG Award for Artist of the Year, and the Legends Award for his contribution to the preservation of the Great American Songbook. He has performed alongside Tony Danza, Andrea McArdle, Jack Jones, Lainie Kazan, Donna McKechnie, Faith Prince, Billy Paul, Jennifer Holliday, Debby Boone, and Linda Lavin. At the age of 11, he began touring with Liza Minnelli as her opening act and was a mainstay on her tour for 10 years. Among the venues he has played are Carnegie Hall, Lincoln Center, Birdland, 54 Below, and Chicago Shakespeare Theatre. His previous solo albums include On Another Note (2017), Nineteen (2010), and Blame it on My Youth (2006) www.TheNicolasKing.com