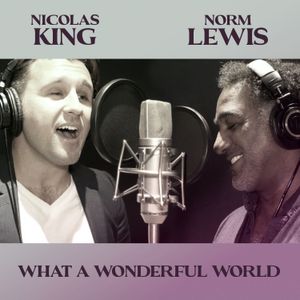 Nicolas King (Beauty and the Beast, Hollywood Arms, A Thousand Clowns) has teamed up with Norm Lewis (Les Miserables, Porgy and Bess, The Phantom of the Opera) for the first single off King's new record, "Act One" - a collection celebrating 25 years of recordings (his first recording is from age 4!)!

Check out the video HERE!

The single was released on January 8, and album will be released digitally on January 22 (with a physical release date set for February 26th!)

Filmed and Directed by Nellie Beavers
Recorded at Sound on Sound Studios, NJ
Mixed by Ed Kessel, Mastered by Steve Rizzo
Special thanks to Jerry LaGuardia and Richard Jay-Alexander

Not many 29-year olds can boast of a 25-year career. This is only one of the accolades that sets Nicolas King apart from his peers. Act One features performances that span these 25 years, including a duet with Tom Selleck ("Yes Sir, That's My Baby"), a duet with the incomparable Jane Monheit ("But Beautiful") and an introduction from his godmother, the legendary Liza Minnelli, for whom he was the opening act from 2002 to 2012. Nicolas appeared in three Broadway productions before the age of 12 and television and live performances too numerous to name followed. Known as a "Skat King", Nicolas has a gift for proving that jazz music is fun and relevant whether you are 12 or 92. We will see a lot more from Nicolas King because after 25 years, he's just getting started!

Nicolas King has been performing since he was four years old. He was in three Broadway productions ("Beauty & The Beast", "A Thousand Clowns" with Tom Selleck, and Carol Burnett's "Hollywood Arms," directed by Hal Prince) before the age of 12. He has also appeared in many national TV commercials, including the award-winning 'Oscar Mayer Lunchables' commercial. King has appeared on TV talk shows, such as "The View," "The Today Show," "Sally Jesse Raphael," "Liza & David" and was on "The Tonight Show" with Jay Leno twice (including Leno's final week as host in 2014).