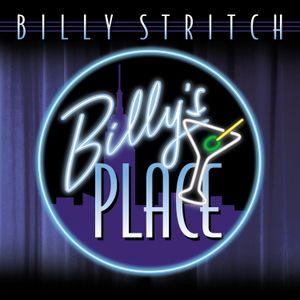 Nashville, TN (October 23, 2020) – When live performances stopped, many artists found themselves faced with uncertainty, challenges and a longing to perform. It didn’t take long for musicians like Billy Stritch to find a new home online. Billy’s Place quickly became a successful weekly online music show that allowed Stritch to entertain from the safety and comfort of his home. Today’s release, Billy’s Place, is a recording of some of Billy’s favorites from this series.  Recorded for Club44 Records, it is available on all streaming music platforms and distributed by Provident/Sony Distribution.

“I’m so excited about this new collection of music!” shares Billy Stritch. “First of all, it’s the first truly solo recording I’ve ever made (just me, no band) so it has a deeper level of intimacy and connection than any of my previous releases. The song selection was borne out of my weekly livestream show, “Billy’s Place.” As the weeks went on, I was able to learn and present music by a diverse group of composers, and the songs on the CD are many of my favorites from these shows. I was able to include many favorite songwriters, including (Richard) Rodgers and (Lorenz) Hart and Hoagy Carmichael, as well as more contemporary writers like Peter Allen and my friend Barry Manilow. I also am thrilled to present an original song, “Since You Left New York,” which I wrote with my “Does He Love You” co-writer Sandy Knox. The song is a Valentine to my adopted hometown of New York, and the lyrics resonate especially well these days.”

Billy continues, “This project will always have a special meaning for me, because it came together out of my need to create new music in the midst of this crazy time in the world. I’m so grateful to Wayne Haun, and Joel Lindsey and all the gang at Club44 Records for allowing me to come to Nashville and spend a couple of days making this record!”

Offering Billy’s Place as a recording was something the owners of Club44 Records knew they had to do. Co-producer Wayne Haun states, “Billy’s talent shines through a live band, a studio session or even an orchestra. But when that’s all taken away and it’s just Billy singing at the piano, something supernatural happens. I’m moved. I’m elated. I’m even educated.”